More and more people are getting their news online. This worries those that think the internet and the technologies that underpin it will produce highly polarised news environments, with little potential for the shared debate that well-functioning democracies need. But data from our 2017 Reuters Institute Digital News Report shows that polarisation of online news audiences varies dramatically from country to country, even in nations with similar levels of technological development.

Our survey shows that the internet now rivals television as people’s main source of news in most of the 36 countries we looked at – and under-35s have a particularly strong preference for online news. But despite this, many aspects of how people get news online remain poorly understood. As a result, we lack information about how online news audiences take shape. 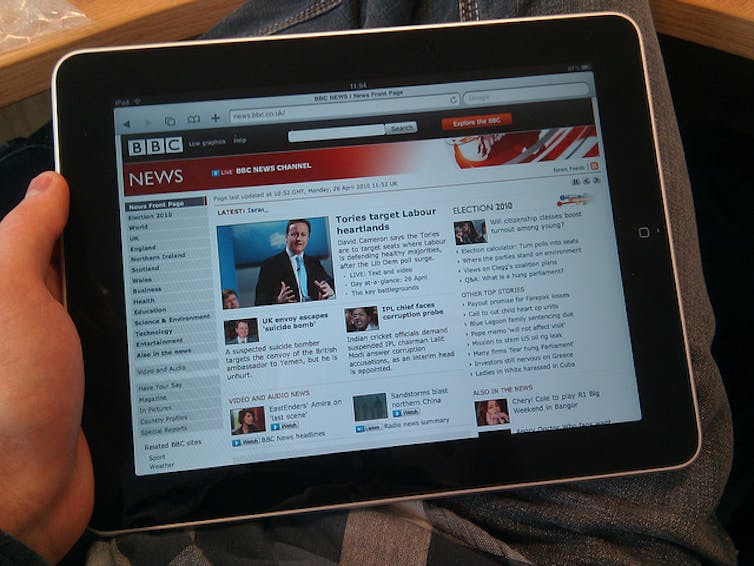 The BBC is the most popular source of online orwayews in the UK. Byrion Smith via Flickr, CC BY-SA

Our preliminary research into online news audience polarisation, however, can shed some light on this. Our survey measured which online news sources people use on a weekly basis, as well as where they would place themselves on a seven-point scale ranging from “very left wing” to “very right wing”. When we look at the audiences for various news sources, we see that some have more people who self-identify with the political left than the right – and vice-versa.

Take the audiences for three news sources popular in the UK (Figure 1). The Guardian has more readers who self-identify with the left (43%) than with the right (12%). The opposite is true of Mail Online. Sky, meanwhile, has a fairly even split. 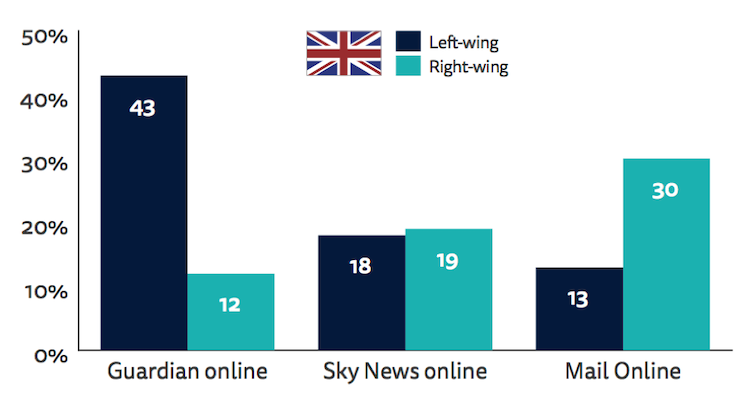 We can use this data to create a map of the most popular online news sources within a country to get an idea of the level of polarisation that exists (see Figure 2). The further each brand is from the mid-point (the average political leaning of the population as a whole), the more their audience is made up of either left-wing or right-wing users.

Traditionally, the UK has been home to a highly partisan press, so we would expect to see popular newspaper brands at the edges of the map. The size of the bubbles represent the weekly online news reach of the brand. The largest bubble is for BBC News online, which has an audience that is slightly to the left of the population as a whole, but still close to the centre. This makes sense, given that the BBC is both well-funded (at least compared to some other public service broadcasters in Europe) and has a mandate to be politically impartial.

Compare this to the US (Figure 3). Here, the bubbles are more spread out, highlighting that some news brands have even more skewed audiences than in the UK. National broadcasters such as Fox News are at the edges. Most other publishers have an audience that is more left-wing than the population as a whole. Also, notice that the middle of the map is relatively sparse, with few of the most widely used sources attracting those from the left and the right in equal numbers – or a large proportion of centrists. On this basis, it would appear that online news media is more polarised in the US (even as we control for national differences in the political leaning of the population).

Norway, shown in Figure 4, is different again. Brands – whether they have a print or broadcast legacy – have built large audiences by appealing to people from across the political spectrum. Like many other northern European countries, Norway used to have a strong party press. Some newspapers – such as Dagsavisen, with its historic links to the Norwegian Labour Party – do still have skewed online audiences. But despite this, more recent moves towards a more neutral, commercially orientated press – together with a popular public service broadcaster – mean that the Norwegian online news environment is considerably less polarised than the US’s.

We see even more variation when we use this same method to consider other countries in Europe. Of course, this is just one way of measuring political polarisation. Potentially, there are many more. We can also conceive of polarisation along different dimensions, such as age or level of interest in the news, both of which might have important societal consequences.

But the differences are still striking, because they show that the internet does not guarantee polarised news audiences. All three countries are highly technologically developed, with similarly high levels of internet penetration (UK 92%, US 90%, Norway 96%, according to Internet World Stats). Even the figures for social media use do not seem to support the idea that technology is the primary driver of polarisation. Weekly social media news use is as high in Norway (53%) as in the US (51%) and higher than the UK (41%), but news audiences are clearly much less polarised.

The causes of news audience polarisation are likely to be numerous and complex. We can also question what the “right” degree of polarisation might be, given that a certain amount is probably necessary to encourage political action and debate. Technology and the development of the tools that make up the web will always be part of the story of how polarisation comes about, but, at least for now, the historical, social and political factors that shaped media systems – and the consumption of news – throughout the 20th century seem to offer better explanations for the differences in polarisation we see.

This article was originally published on The Conversation. Read the original article.